Brighton Orpheus Choir can trace its history back to 1942 and the Withdean Club, which was created to promote social and cultural activities in the area. The club formed a choir called the Withdean Choral Society, conducted by Tom May, the Verger at The Church of Christ the King Patcham. Groups like this would have been extremely important for morale during the Second World War. In 1945 Gladys Everdon took over as conductor and the redoubtable Muriel Hart became the choir’s accompanist, a role she carried out for 71 years until retiring in 2015.


Because members of the choir were drawn from all parts of Brighton, in 1954 the name was changed to the Brighton Orpheus Choir – Orpheus being the musician and poet of Greek Mythology taught to play the lyre by Apollo. A contemporary version of the lyre still features in the choir’s branding today.

The choir gave concerts at Patcham Secondary School every May and November, and a carol concert before Christmas. In 1946 Brighton Orpheus Choir put on their first concert at Varndean School for Girls with a performance of Hiawatha.

In 1947 Gladys Everdon left Brighton and Patricia Harding became the choir’s conductor. Under her leadership the choir must have developed their musical ability and were performing such works as Brahms’ Requiem, Michael Tippett’s A Child in Our Time, Bach’s St. Matthew Passion and Handel’s Israel in Egypt. Gladys remained connected to Brighton Orpheus by becoming its first President, a role she held until 1958. Alderman Dorothy Stringer then took on the position until 1963. During these times the choir was affiliated to the National Federation of Music Societies, the Sussex Rural Music School and the Patcham Community Association.

The National Federation of Music Schools supported concerts with funds from The Arts Council of Great Britain. The Brighton Education Committee were also giving a small grant towards running expenses.

Patricia Harding (who was Head of Music at Varndean Grammar School for Girls) was Conductor of the Brighton Orpheus Choir for 51 years until Stella Hull took over the position in 1999. 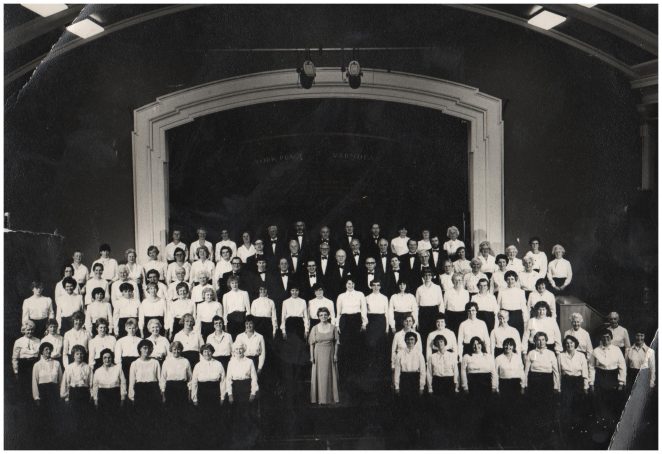 Under the directorship of Stella, the choir continued to perform a major choral work in the autumn and spring, with a professional orchestra and soloists and a much lighter mixed programme in the summer.  The choir together with Orpheus Young Singers sang in the City Christmas Concert from 2006 to 2009. Stella led the choir for over 20 years until ill health forced her to step down.

The choir is now under the directorship of Nicholas Houghton. It continues to attract members from all over Brighton and Hove and as far away as Shoreham and Lewes. The choir goes from strength to strength and now performs three major concerts a year with professional soloists and orchestras.